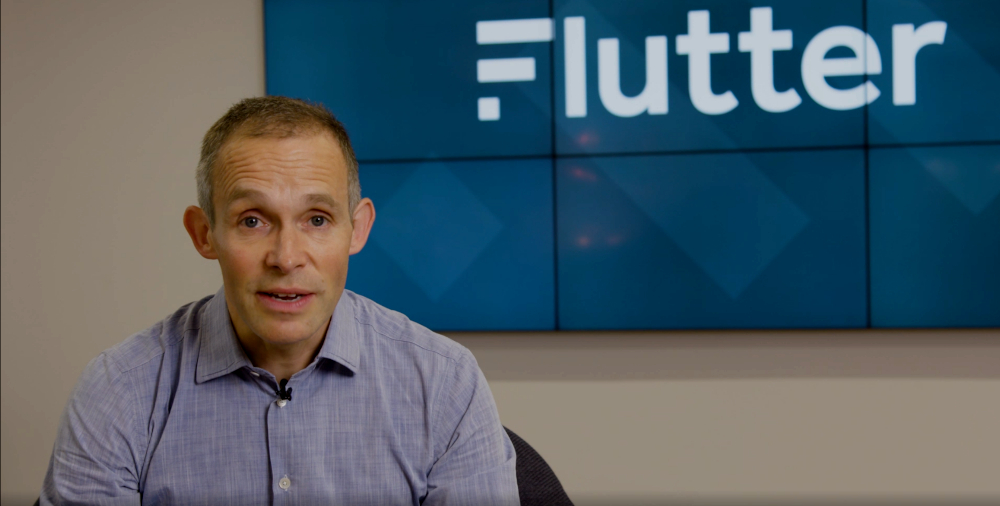 Flutter Entertainment plc presented mixed news in a trading update for Q1 2022 on Wednesday. While announcing a 6% year-to-year increase in overall revenue, figures posted by the global gaming conglomerate showed the increase was driven largely on “another excellent performance” by FanDuel during the quarter.

But the performance by Flutter’s US division — which, besides FanDuel, includes its FOX Bet, TVG, PokerStars US, and Stars Casino brands — was also striking for two reasons:

In another sign of the US division’s growing importance to the Dublin-based company, Flutter CEO Peter Jackson said the US accounted for more than half of all stakes for the company in Q1 2022. Flutter said US stakes more than doubled and totaled $7.7 billion in the quarter.

“FanDuel continued to deliver unparalleled scale,” Jackson said. “We beat a number of FanDuel records in the quarter — Super Bowl Sunday was the single biggest day ever for new customers, and we had more than 1.5 million active customers on the day. March Madness this year also proved our most popular season yet, attracting 19 million wagers across the tournament.”

In terms of active customers, Flutter reported that the US division had 2.4 million of them, a 43% increase from the year-ago quarter (1.6 million). By comparison, the entire company had more than 8.8 million customers, up 15% year-to-year (7.7 million).

“We remained the #1 US sportsbook with a 37% online sports betting share,” Flutter said in the update, adding that the figure includes FanDuel and FOX Bet. FanDuel was live in 15 states during Q1 2022, while FOX Bet was live in four.

“We acquired more than 1.3 million new customers in the quarter,” Flutter added. Much of that increase was attributed to launches in Louisiana and New York during the quarter, with the latter “exceeding expectations [and] representing the fastest penetration of our DFS player base to date.”

Customer numbers are likely to grow even further in Q2 2022, reflecting FanDuel Ontario’s launch in April.

The company lauded FanDuel for its “excellent execution” in acquiring and engaging with new customers at a record pace, adding that “compelling customer economics” placed the operator’s cost per acquisition (CPA) at around $290, with paybacks ranging from 12 to 18 months on average.

Flutter said its share of the online casino market in the US was 20% in Q1 2022. It attributed the online casino growth to its successful launch in Connecticut during Q4 2021, as well as “good cross-sell to Super Bowl and March Madness players.”

Flutter reported that its US division saw a 50% year-over-year increase in revenue from sports betting, while casino gaming grew 34% during the same period. Overall revenue for the division was $541.7 million, a 45% increase year-to-year ($363.6 million).

Revenue Down in Other Divisions

Flutter attributed the decline in UK&I revenue in part to the impact of safer gambling measures introduced over the preceding 12 months. It also said more favorable sports results in the year-ago quarter — as well as peak player engagement driven by COVID 19-related restrictions — helped pull down the division’s revenue year-over-year.

Meanwhile, Flutter’s international division was hobbled by its temporary exit from the Netherlands, tax changes in Germany, and the war in Ukraine.