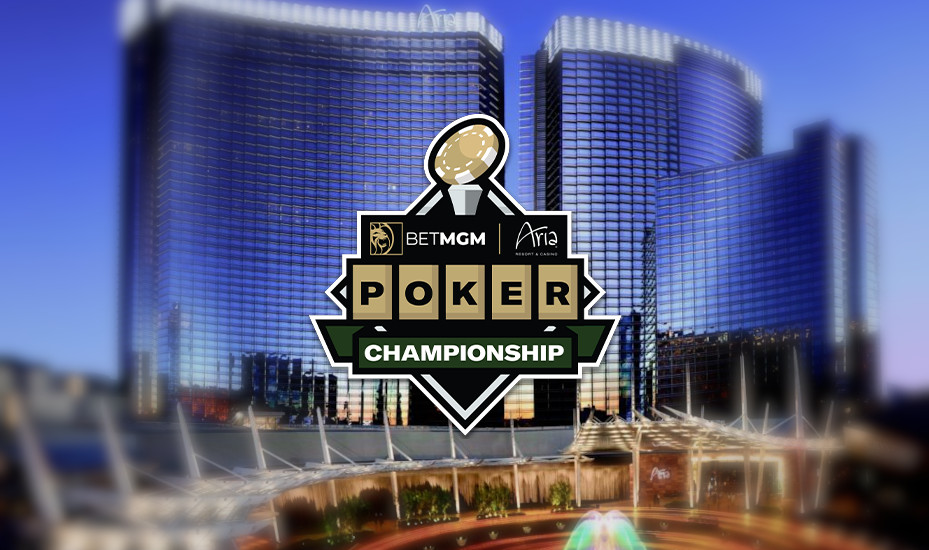 The inaugural Championship poker event will be held at the ARIA Resort & Casino in Las Vegas from June 23 to 26 as part of the ARIA Poker Classic 2022 festival that kicks off on June 1 and runs through mid-July.

It will mark the first time a live poker event will be held under the BetMGM brand in the United States.

The headline event will be a $3500 buy-in No-Limit Hold’em spread across four days carrying a $1 million guarantee. Other highlights include a $600 buy-in Mystery Bounty — the trending event debuting at ARIA on June 25 and sporting $100,000 in guaranteed prize money.

Online qualifiers to the premier live event are already underway on the BetMGM Poker real money platform in each of its three states — New Jersey, Pennsylvania, and Michigan. Players on the newly launched BetMGM Poker Ontario will also be able to win a package to the BetMGM Poker Championship event, as reported exclusively by pokerfuse.

These qualifiers are available for as little as $5, funneling through a total of four steps, which finish each Sunday with a Final step guaranteeing two Championship packages.

Each package is worth $6000 and these include travel expenses, a free five-night stay at the ARIA, and, of course, the buy-in to the $3500 event. Winners of the packages will also earn a seat to the $25,000 freeroll that will be hosted by BetMGM ambassador Darren Elias and guest host Matt Berkey prior to the start of the $1 million events.

The operator has committed to award prize packages to at least 15 players from each of the US online poker markets.

“The first-ever BetMGM Poker Championship descends on Las Vegas during one of the most exciting times of the poker season,” said Luke Staudenmaier, Director of Poker at BetMGM in a recent press release. “ARIA is a legendary poker brand and we’re thrilled that the Championship has become an integral part of this year’s Poker Classic.”

“Through our relationship with MGM Resorts and its world-class U.S. properties, we’ll continue to leverage event programming and connect with players both online and in their favorite poker rooms,” Staudenmaier added.

Could This Mean BetMGM May Launch in Nevada Ahead of the Series?

BetMGM is running the online qualifiers in all of its three states where it is live but there is one state that is missing from the list and that is Nevada itself — the very same state in which the event will be held.

BetMGM has yet to launch online poker in the Silver State, despite its parent company, Entain, being issued a three-year extension to its Nevada interactive gaming service provider license last year. Currently, WSOP.com is the only online poker room operating in Nevada.

However, the launch of the BetMGM Poker Championship could mean that the operator may be close to launching online poker in Nevada — something that has been in the cards for many months. The state of Nevada is already part of the multi-state online poker agreement (MSIGA) along with New Jersey and Delaware, which would allow BetMGM to merge its New Jersey player pool with Nevada.

Michigan, where BetMGM also operates an online poker room — has been recently invited to join the interstate pact and is expected to officially sign on soon.

The summer period is the most electrifying period for live poker players in Nevada as the world’s richest poker festival — the World Series of Poker (WSOP) — usually runs at this time, attracting a huge influx of visiting poker players from across the globe.

This, in turn, drives huge traffic to online poker sites (currently WSOP.com is the only active poker room in NV) as state regulation allows non-residents to create accounts and play on regulated online poker rooms as long as they are located within the state while playing real money online poker.

WSOP.com sees its highest traffic during the months of June and July. If BetMGM were to launch online poker in NV, it would be hoping to target its launch ahead of the peak period. Also, the fact that BetMGM is hosting its first Championship event in Las Vegas, rather than in New Jersey, is also a strong indication that the BetMGM Nevada launch may be very near.

The inaugural BetMGM Poker Championship event runs from June 23 to 26, while the larger ARIA Poker Classic, comprising nearly 50 events, runs from June 1 to July 17. The competing WSOP 2022 live series kicks off on May 31 and runs until July 20.